What Can I Expect After Being Arrested for a DUI in California?

Home » Blog What Can I Expect After Being Arrested for a DUI in California?

WHAT CAN I EXPECT AFTER BEING ARRESTED FOR A DUI IN CALIFORNIA? 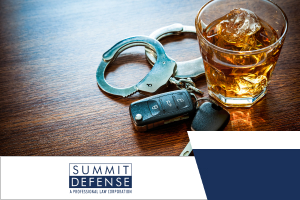 A DUI charge is a severe criminal offense in California. DUI arrests take away a massive part of your driving privilege and could tarnish your reputation. Prior DUI convictions can inflict further damage to your career opportunities, driving rights, and immigration status.

This blog will go over what you must expect when facing DUI charges. This blog can also help you navigate the DMV hearing process and understand the punishment that goes with a DUI arrest. Read further to learn more.

THINGS TO EXPECT WHEN YOU GET A DUI IN CALIFORNIA 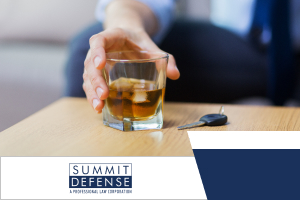 Receiving a first offense DUI in California is a misdemeanor in most cases. There are various DUI charges in California, depending on the nature of the violation. These local statutes are as follows:

The penalty accompanying a DUI arrest varies depending on the severity of the case. A drunk driving arrest involving bodily damage or death has harsher penalties than a simple drunk driving case.

Following a DUI arrest, here are what you should expect if you are arrested for a first-time DUI in California.

If you are arrested for a DUI in California, you must schedule a hearing with the DMV. This process is called an administrative per se hearing. The DMV will determine whether your license will get suspended or revoked during this process.

When a law enforcer acquires your license, they will give you a notice of suspension. In this notice, a number is written that a driver can call to schedule a DMV hearing. Often, the DUI defense attorney does this.

Once a hearing is scheduled, the DMV will provide you with a temporary license for 30-days. However, situations exist when the DMV cannot hold your hearing within 30 days. They will issue a document allowing the temporary license extension in these cases.

FACTORS THAT THE DMV CONSIDERS

The DMV or California's Department of Motor Vehicles considers various factors before deciding on your license. One of the most observed factors is the result of your chemical test.

The DMV will check if you agree to take a breath or blood test. They would use this to determine if you exceeded the state's legal limit for blood alcohol concentration.

They will evaluate if the responding law enforcer lawfully arrested you for DUI. A law enforcer must inform you of the consequences of rejecting a chemical test.

If you decide not to accept the blood or breath test, you risk your license for suspension or revocation. 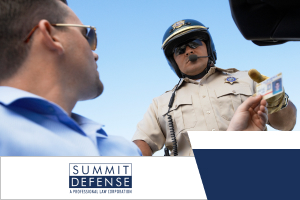 If you are convicted of drunk or drugged driving in California, the court may impose a license suspension. This suspension will last for a certain number of months or years, depending on your case.

It's essential to remember that a criminal trial is independent of the scheduled DMV hearing. You can prevent a court-imposed licensed suspension by setting up a hearing with the DMV. But this is not enough. You still need to win in that administrative hearing.

APPEARANCE IN COURT IS MANDATORY

If an enforcer arrested you for driving under the influence in California, you must appear in court. Unlike the DMV hearing, a defendant must attend a criminal court hearing.

Failure to make a court appearance may result in license consequences such as suspension or revocation. It's important to remember that attending all court hearings is mandatory once you receive a conviction for driving under the influence. 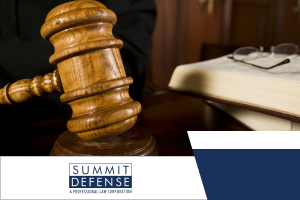 Although both legal procedures are essential to your DUI case, a DMV hearing officer is limited by what he can impose on a defendant. A criminal court judge can inflict a severe impact on your criminal record.

To further understand the difference between a DUI court decision and a DMV hearing decision, we listed some key differences below:

PENALTIES FOR A FIRST DUI OFFENSE IN CALIFORNIA

If you are arrested for inebriated driving in California, you can face many legal consequences. A first DUI offense is a misdemeanor in most cases. At this offense level, you may be able to keep driving if you obtain an 'ignition interlock device restricted license' for a few months.

You will also likely be required to partake in DUI classes. The court may also demand you install an ignition interlock device (IID) in your car.

If your blood alcohol level is exceptionally high or you were involved in an accident, you may be facing more severe charges that could result in jail time.

Here's a list to further understand what penalties you may face in drunk driving charges:

Regardless of the specifics of your case, it is essential to seek experienced legal representation immediately. DUI lawyers can help you achieve a favorable case outcome.

PROBATION INSTEAD OF JAIL TIME 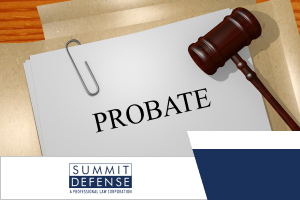 When the court convicts a defendant for DUI, the judge may choose to sentence them to probation instead of jail time.

Receiving probation means that the defendant must follow certain conditions, such as attending DUI classes or installing an ignition interlock device.

Probation is a criminal sentence of supervision in the community rather than imprisonment. It is a way to keep an offender out of jail and allow them to continue their life, as long as they comply with the court's orders.

The court may offer probation instead of jail time or, in addition to a jail sentence. There are two most commonly known types of probation: informal and formal probation.

If the court grants you probation, there are certain things you can and cannot do during the probationary period: 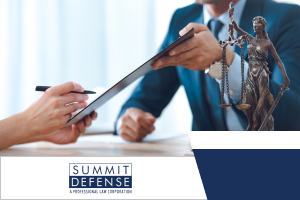 There are instances when the court may demand additional penalties or conditions for your DUI probation. The court's decision to include other conditions in your probation depends on the nature of your case.

They may require you to attend organization meetings or support groups such as Alcoholic Anonymous, Narcotics Anonymous, or Mothers Against Drunk Driving Victim Impact Program.

Furthermore, the court may also require you to pay for victims' compensation if they sustained injuries. The amount of restitution varies depending on the damages received by the victim.

WHAT HAPPENS IF YOU VIOLATE YOUR DUI PROBATION'S TERMS?

If you neglect the conditions of your probation, the court may issue a bench warrant for your arrest. A bench warrant is a legal penalty given by a judge to arrest and bring the defendant before the court.

The consequences of a bench warrant depend on the severity of the violation. The court may also consider the defendant's standing criminal record.

Typically, a bench warrant will result in the defendant being taken into custody and brought before the court. The court may then sentence the defendant to maximum jail time or imprisonment.

WILL YOU LOSE YOUR LICENSE AFTER YOUR 1ST DUI ARREST? 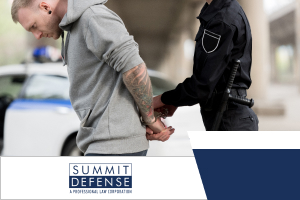 When you are arrested for DUI in California, the officer will confiscate your driver's license. Once the officer suspends your license, they will give you a notice that spells out the suspension process and your rights.

This notice of suspension is effective for 30 days after your arrest. The defendant will need to arrange a hearing with the DMV within ten days after a DUI arrest. If the defendant fails to do this, the DMV can impose an automatic license suspension.

GETTING A RESTRICTED LICENSE AFTER YOUR FIRST DUI OFFENSE IN CA

There are two types of restricted licenses in California. These licenses are the ignition interlock device (IID) restricted and standard limited licenses. These two licenses have differing regulations and applications. 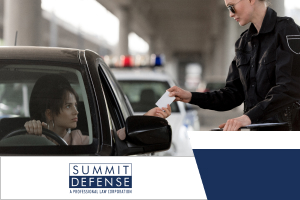 An ignition interlock device (IID) is a device installed in a vehicle and measures the driver's BAC. If the driver has a BAC above the legal limit, the IID will not start the engine.

Furthermore, a defendant with a detected amount of BAC greater than or equal to 0.02% may have to extend their IID restriction to 10 months.

An emergency medical situation is also permitted with a restricted license. If public transport is unavailable, a defendant can also use the limited license to drive a minor or a dependent adult. 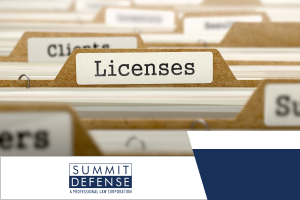 Obtaining a restricted license in California is not much of a hassle. The DMV requires defendants with a suspended license to submit an SR22 form. You must submit the form to the DMV within ten days of the arrest.

The SR22 form is a certificate of financial responsibility that proves the driver has car insurance. This form is a critical document proving that you can be held responsible for any damages you might cause.

You may also need to submit other essential requirements, such as proof of enrollment in a DUI school. In addition, you may also need to pay a $125 reissue fee. This amount can change to $100 if the defendant is aged 21 or below.

Hiring a criminal defense lawyer can help you seamlessly organize and process your restricted license request. Furthermore, they can help you resolve any conflict that might arise during the application process.

IS A DUI CONVICTION PERMANENT ON MY CRIMINAL RECORD?

A first DUI offense is a misdemeanor in California in most cases. The DUI arrest will stay on your criminal record for ten years.

A DUI conviction can have long-lasting effects. Receiving a DUI misdemeanor can affect your driving rights, job opportunities, and insurance premiums. Moreover, you may also need to pay thousands of dollars in fines and fees.

GETTING YOUR FIRST DUI CONVICTION EXPUNGED FROM YOUR RECORD IN CALIFORNIA 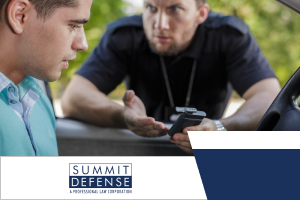 The primary benefit of obtaining an expungement is for career purposes. Employers are legally bound by the law to prohibit asking applicants about their criminal convictions during an interview. However, once a job offer is made, they are legally allowed to ask this question.

Before you can apply for an expungement, you need to identify first if you can qualify for one. Here's what California Law allows for expungement:

Once you complete the probation, you may apply for expungement to the court. The judge will then review the defendant's case to approve or reject the defendant's request. If allowed, the court will remove your DUI conviction from your record.

FACTORS THAT CAN AGGRAVATE YOUR FIRST-TIME DUI PENALTIES

Aggravating factors increase the penalty of a crime. The added penalties can range from enhanced community service to a longer jail sentence. A first-time DUI may have more significant penalties in California if the court identifies the following factors.

Moreover, the court may also factor in your criminal history to impose an enhanced legal penalty. If they identify that you have a prior DUI conviction, the court is more likely to give a heavier DUI sentence.

Even if it's your first DUI offense, the court can still give a harsh sentence depending on the aggravating factors of your case. This is why it's essential to have a reliable DUI attorney during the legal proceedings.

PENALTIES FOR A FIRST DUI WITH INJURY 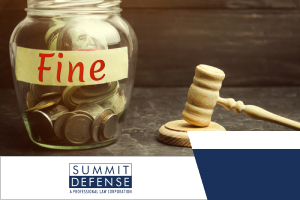 California Vehicle Code 23153 VC outlines DUI cases causing bodily injuries. A first offense DUI is charged as a misdemeanor offense in most cases. In line with this offense level, the punishment is less harsh than a felony offense.

However, a DUI with injuries is a wobbler offense. The court will look at the accounts of the case and the driver's criminal history to identify the appropriate offense level.

IS IT YOUR FIRST DUI ARREST? CONTACT A DUI LAWYER ASAP! 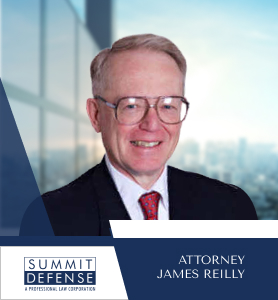 DUI attorneys are experienced legal professionals who handle this field of criminal law. It's essential to seek the best legal service available for you. Our DUI attorney at Summit Defense can help you build the best legal defense for your situation.

Building a solid attorney-client relationship is crucial in these situations. A reliable and proficient DUI lawyer will ensure that they will handle your case with confidence and confidentiality.

If you are in great need of an expert and reliable criminal defense lawyer, call us now at 1-866-851-9645. We provide a free consultation for all our potential clients. You may also use our online contact form to reach us.